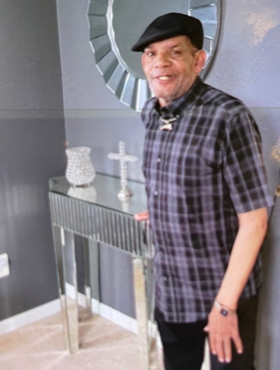 Frank E. Temple beloved son of the late Henry S. Temple and Daisy Allen was born in Baltimore, Maryland on August 8th, 1951. He departed this life on May 17th, 2022 after a sudden illness.

Frank was affectionately known as “Baby” by family and friends. He received his education in the Baltimore City Public School System. Frank began his career early as a custodian for Baltimore City and County Public Schools before retiring. Frank was a jokester whenever you seen him coming you know you were going to get a good laugh. He loved to sing and dance to his oldies but goodies. It never was a dull moment when “Frankie Nitti” as his niece Tammy called him was around. Frank was a sharp dresser as he would say he was cleaner than the Board of Health. Among the many activities he enjoyed a good game of ping pong, hanging out with the fellas after work out and most of all spending time with family, especially his mother the late great Daisy-Bell as he called her. “Baby” was just that when it came to his mother!

To send flowers to the family or plant a tree in memory of Frank Temple, please visit Tribute Store
Monday
23
May

Share Your Memory of
Frank
Upload Your Memory View All Memories
Be the first to upload a memory!
Share A Memory
Send Flowers