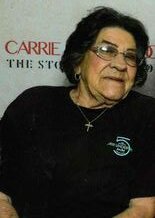 Charlotte Anna Black (nee Baker), of Baltimore, Maryland, passed away peacefully on March 25, 2022, at the age of 86.

She is preceded in death by her husband Paul; parents Joseph and Helen Baker; brothers Joseph and Henry Baker; sisters Lillian Guest and Helen Anderson; and son-in-law Michael Brocato.

Charlotte was a diehard Ravens fan.  She never missed watching a game.  She would cheer and yell at the TV as if they could hear her.  She also loved the music of Carrie Underwood.  Her favorite song by Carrie was Jesus Take the Wheel.  She was a member of Carrie’s fan club and in 2016 was chosen to meet Carrie.  She was so excited that she lost the picture she was going to have Carrie sign.

To send flowers to the family or plant a tree in memory of Charlotte Black, please visit Tribute Store
Thursday
31
March

Share Your Memory of
Charlotte
Upload Your Memory View All Memories
Be the first to upload a memory!
Share A Memory
Send Flowers