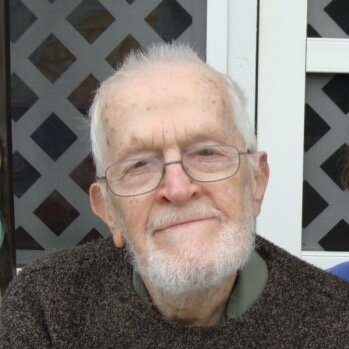 Please share a memory of John to include in a keepsake book for family and friends.
View Tribute Book
"John Brazier Howell, beloved father, grandfather, friend, and Baltimore curmudgeon, passed away peacefully at Roland Park Place on September 27th, 2021, one month after celebrating his 99th birthday. Born in Los Angeles to A. Brazier Howell, former instructor at Johns Hopkins, and Margaret Gray Sherk, he served in WWII in France in the communications infantry and only ever saw the Eiffel Tower from the back of a Jeep. After the war, he married Marguerite Banks in Baltimore. The marriage ended in 1977 and later in life he found his sweetheart, Lauretta Gordon. His long career at Johns Hopkins as an instructor of electrical engineering lasted well into his 90’s, ending only when they stopped providing parking for his horse and buggy. He will be remembered for his theater and opera roles, and his resonant tenor singing voice. Lisa DeNike, theatre critic for The Baltimore Sun, wrote in 1982 that his performance as “the feisty, concerned and comical” Giles Corey in The Crucible at Essex Community College was “worth the trip just to see him, ...embodying the part with a spirit surpassing anything else offered on stage that night.” John Howell is survived by his daughter Ann W Howell and her husband Tom Hickey, and two granddaughters, Elinor Howell (and her wife Jessica LaVigne Howell) and Sarah Hickey, who have more than enough extra copies of his family tree to go around. Interment will be a private affair at Loudon Park Cemetery with a possible celebration in the spring of 2022 when Covid restrictions allow."
To send flowers to the family or plant a tree in memory of John Howell, please visit Tribute Store
Online Memory & Photo Sharing Event
Online Event
About this Event

Look inside to read what others have shared
Family and friends are coming together online to create a special keepsake. Every memory left on the online obituary will be automatically included in this book.
View Tribute Book
Services for John Howell
There are no events scheduled. You can still show your support by sending flowers directly to the family, or planting a memorial tree in memory of John Howell.
Visit the Tribute Store

Share Your Memory of
John
Upload Your Memory View All Memories
Be the first to upload a memory!
Share A Memory
Send Flowers